Pete Fowler’s art is instantly recognisable. He’s one of those artists who, when you see his work, you go, “Pete Fowler, that’s a Pete Fowler that is.” This is because he’s the king of colourful, vector­-based character illustration, including monsters, folk art, flying skulls and owls. When I spoke to him he had a vicious cold and was just about to open his solo show ‘Unholy Mountain’. 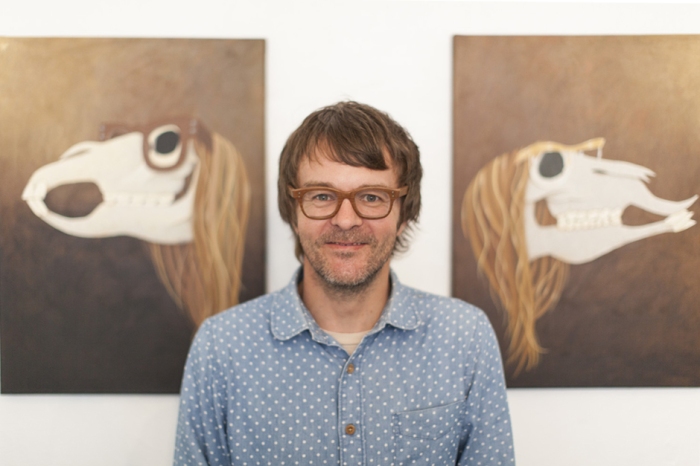 Hey Pete, how are you feeling? Have you got the dreaded man flu?
I’ve felt better to be honest but it’s not ebola!

Your exhibition was called Unholy Mountain. What’s it all about?
Mountains, islands, all lumps of rock and earth! It’s about a lot of things. The state of the world, the state of my brain and all that was going on in my life and around me at the time of painting and sketching up the ideas for the show. I love a bit of conspiracy theorising and have recently weaned myself off watching too much stuff on YouTube, but they certainly went into the ideas behind the paintings. I also was watching the repeat showings of the BBC drama Edge of Darkness, which was where the black flower in one of the paintings came from. I also revisited Threads, another grim BBC drama that freaked out everyone that watched it in the 80′s. Friends of mine said they showed it in schools, which blows my mind. I don’t want to make the subject matter of the show sound too dark as I think I balanced the dark elements with a playful edge and my own sense of surrealism.

Can you remember the exact point you realised you could make money from the ink in your pens?
I think it was when I first came to London to work for a week when I was living in Falmouth, Cornwall. I was invited by a friend to do some work for a clothing shop in Soho and at the end of the week I got paid and thought, “this is it, I’m moving to London.” A month or so later I found myself living in an unheated council flat in south London. Living the dream!

If, or even when, you fall off the mortal coil, would you want your flying skull or any other of your monsters made into a gravestone for you?
That’s one thing you can rely on… death. I always loved Spike Milligan’s engraving on his tombstone: ‘I told you I was ill.’ I think I’d (romantically) like a picture of the sea crashing onto the shore. Either that or a UFO beaming me up to the outer reaches of the universe. I’ll let my estate choose which of the two to get done. I always like the more humble approach to headstones, there’s something a bit show offish about a grand one, so I’ll go for the simple approach: Italian marble, gold, cherubs, bat skulls and a glitter bomb that goes off at 12 midday, every day.

Subtle. ­Why do people write on walls, Pete? Why?
People have been scratching things on walls since time began so I think it’s an extension of that, leaving your mark in time and space. Nowadays, things are quite different in many ways (understatement!). With the rise of graffiti and now street art, it’s a very competitive area to work in with a lot of artists work ending up in galleries once they ‘prove’ themselves on the streets. I live and work off Brick Lane so I see new artwork going up on a daily basis and the street art tours that profit from them, so it seems like a bit of a gold rush aspect to it at the moment. I like the freedom that it brings to make whatever image you want on the streets and be yourself within that. That’s the underlying point for me, but I would never be able to make an illegal piece of work on the streets. I’m far too law abiding and paranoid about being caught, at my age as well, would be a bit of a scene!